I just received two new books I ordered: The Murder Business and Death and Justice, both written by Mark Fuhrman. Death and Justice is about the injustice in Oklahoma and how we have sent many innocent people to prison and to death row. I highly recommend it.

This is an excerpt from The Murder Business: "Media and law enforcement work at cross-purposes. Law enforcement want to solve a case as fast as possible and put the guilty behind bars. The media want a case to drag on as long as humanly possible, and do all they can to extricate every last bit of drama, drop by bloody drop, in order to hold the attention of the millions of viewers who have gotten hooked. Law enforcement must abide by rules. The media make their own rules, and even then break them, or find ways to work loopholes into them. All that matters is ratings.

If people knew how it's done--how the media seduce, buy, bribe, and corrupt, like an inevitable, malignant cancer on a murder investigation--they might be too sickened to buy the next ticket to the carnival...

The unfortunate truth is that today, each murder has many victims, and high-profile murders can hurt innocent people who get burned by the spotlight, whether or not they sought it out themselves. I learned that firsthand as a police witness in the O.J. Simpson trial, a wrenching experience that showed how the criminal justice system can be manipulated by money, power, politics, and fame.

In twenty years of police work, I thought that the guilt or innocence of the suspect was all-important. Then I started covering high-profile murder cases, where ratings and profit often far outweigh the importance of facts." 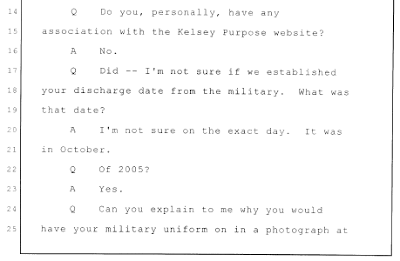 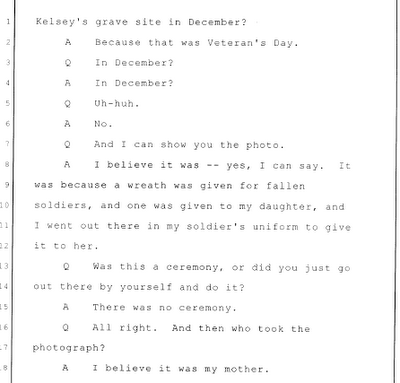 On December 12, 2005 Jeanna stated, "Did he call Lance to active duty for the protection of his country in order to give Kelsey's story the edge that it needed for the media?" 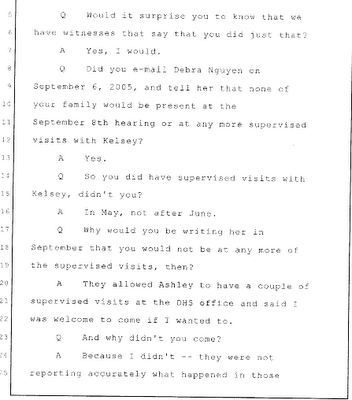 Today I spent part of the day working on my book and I'm trying really hard to keep it positive. When I come across some things, my message gets a bit off track.

The first line states: "We need your help in clearing the name of a soldier fighting in Iraq." It doesn't start with "help me save my grandchild" or "I'm fighting for my grandchild."

It seems that each day I learn something new and I grow even more sad for a child I never met. I also grow more certain that Raye was the one who fought for Kelsey. My heart breaks for her.
Posted by Advocate at 7:31 PM 4 comments:

Thank you Emily for introducing me to this song. I've never heard it before now. It speaks volumes.

This video was removed from Youtube because of complaints from one of the haters. It's a slideshow of Raye and Kelsey, as read by Raye's big sister, Janet.