Finally! A fact-based article from The Oklahoman.

NEWKIRK — The mother of Kelsey Smith-Briggs will be back in court Sept. 1 for a fact-finding hearing on the "strong possibility" of juror misconduct during her 2007 trial.

Kay County District Judge D.W. Boyd is holding the hearing to gather evidence for the Oklahoma Court of Criminal Appeals.

The dead girl's mother, Raye Dawn Smith, is serving 27 years in prison for enabling child abuse. Smith, 30, is asking the appeals court for a new trial. A decision could come late this year.

At issue is whether a female juror during the trial watched television coverage of the case and checked an Internet site devoted to Kelsey. A former co-worker claims the juror admitted to doing both.

The former co-worker also claims the juror during the trial "told me... Smith should fry... looked like a junkie, was trash and no good."

Jurors are supposed to avoid the news during a trial, not form any opinions until all the evidence is presented and not do any research outside the courtroom.

Kelsey, 2, is the Meeker girl whose death from abuse in 2005 became highly publicized.

Many Oklahomans were angered because she died even though DHS workers, a private child-welfare worker and a state judge were overseeing her care because of her repeated injuries.

The death prompted reform legislation and a lawsuit by the girl's father. The state last year paid $525,000 to settle the lawsuit.

The juror, Brandi Marie Oldham, said in an affidavit in 2007 that the jury deliberations and verdict "were based solely on the evidence we received in the courtroom during the course of the trial." Oldham on Friday declined to comment to The Oklahoman about the case.

"Sir, you need to not contact me," she said to a reporter when reached by phone at her work in Jenks.

The former co-worker, though, claims she called him several times daily during the trial with an update on what was going on.

In a 2008 affidavit, Ronald Todd Bowman, of Sapulpa, wrote the juror "admitted to me daily that she watched the television news coverage of the trial... and made statements to me that the news didn't know what she knew about the case."

Bowman also stated the juror "advised me... during the trial she and the other jurors looked at the Kelsey website to see what was on it and to see what information was being added."

The website, Kelsey's Purpose, was created after the girl's death and at times had information critical of Raye Dawn Smith.

Bowman wrote he and the juror then worked in Sapulpa at a home health care agency. He wrote he had hired her and was training her to take over his position. In a separate affidavit, Bowman's roommate, Sean Clack, wrote in 2008 that he overhead the daily conversations.

"Ms. Oldham admitted to Mr. Bowman that she often went on the Internet and conducted research about Ms. Smith's case during the trial. She would check and see what was being reported about the case online," Clack stated. "Ms. Oldham also admitted to my roommate... that she had reviewed the Kelsey Briggs' website during the trial. Ms. Oldham told Mr. Bowman numerous times she was bored with the whole thing."

The mother's attorney, Stephen Jones of Enid, said the two men probably will testify at the hearing.

"I think she did that," Jones said of the misconduct claims. "There would be no reason these two guys would misrepresent it."

Asked about Bowman's statement, he said, "I think the evidence will show that not to be true."

"Based upon the interviews that I have done since the trial with the jurors, I don't believe there has been any misconduct," the prosecutor said.

Kelsey died on Oct. 11, 2005, at her home near Meeker. The death was ruled a homicide but no one was convicted of murder in her case.

Kelsey's stepfather, Michael Lee Porter, 30, was charged with first-degree murder and child sexual abuse but pleaded guilty to enabling child abuse. He is serving a 30-year prison sentence. He blamed the girl's mother for her death.

The mother was never charged with murder. Jurors on July 18, 2007, found her guilty of enabling child abuse and compromised on her punishment. Some wanted more time and some wanted less, a juror said afterward.

During 2005, Kelsey suffered repeated injuries, including two broken legs and a broken collarbone, and was taken from her mother for a time. Her death came four months after the state judge returned Kelsey to her mother, despite accusations the mother was the abuser.

The evidentiary hearing was assigned to a Kay County judge because the trial judge is retiring.


Following is the letter from the juror's former boss along with witness affidavits. There have been five jurors that have come forward since Raye's trial to state that something went wrong in the trial. Hopefully justice will finally be served with these jurors' voices being heard. Raye deserves a fair trial with an impartial jury that is sequestered and not subjected to the antics of biased members of the press and the Briggs family. Justice will be served with the murder and sexual assault charges heard in a court of law against the man home alone with Kelsey at the time of her rape and murder. 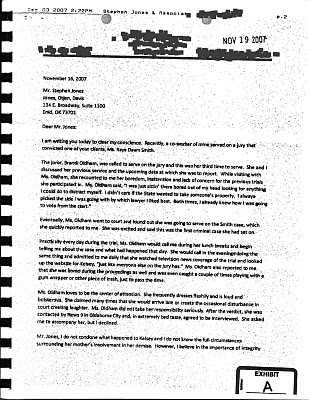 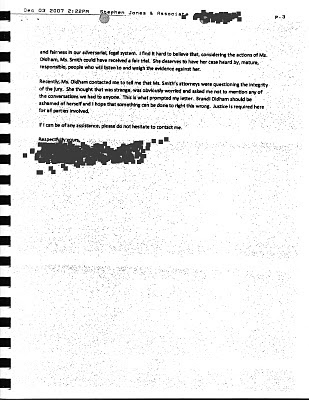 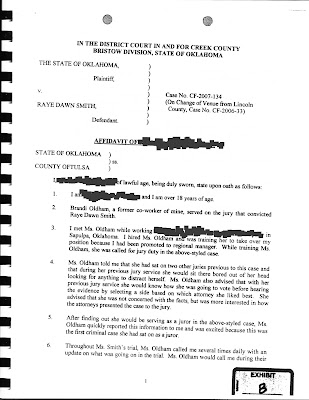 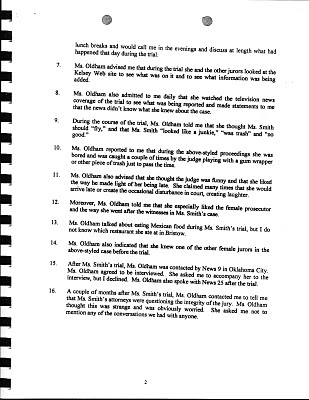 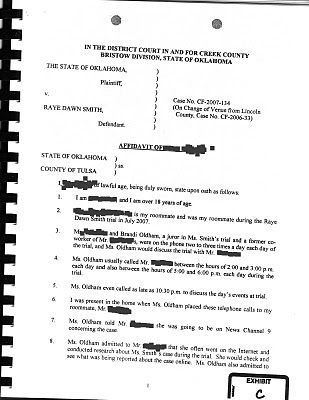 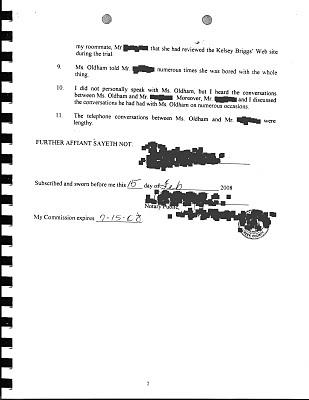 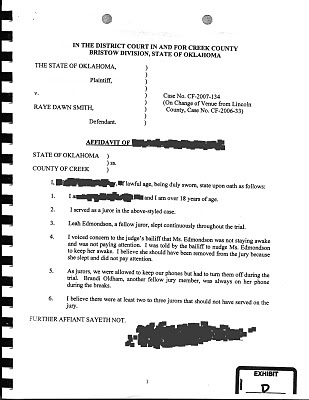 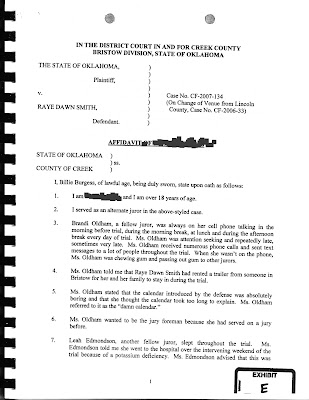 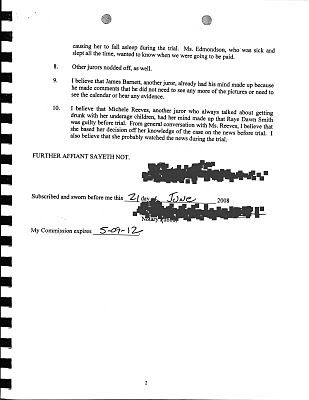 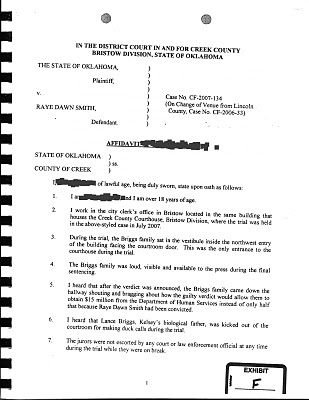 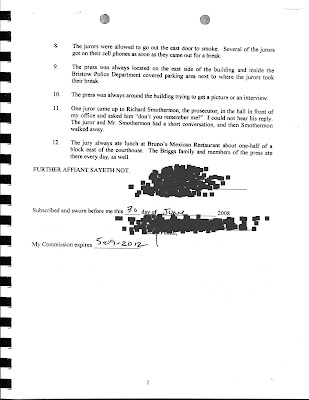 The Oklahoman article can be found at the following link. Of course the bullies have already left comments in an effort to sway public opinion.

Evidentiary hearing set in Kelsey Smith-Briggs case | NewsOK.com
Posted by Advocate at 10:15 AM