Bill Roberson vs Richard Smothermon - The choice is clear

Although I'm not a resident of Lincoln County or Pottawatomie County, I feel the current district attorney needs to be replaced since he allegedly aided in the bullying, stalking, cyberbullying, and harassment of myself by giving my personal information to the cyberbully gang, Kelsey's Purpose.

If one were to look into the reason Richard Smothermon was fired as district attorney of Payne County, and they questioned his current staffers, they would realize that his morals are questionable, at best.

A man who cheats his family will cheat his community.

Richard Smothermon wasn't a legal resident of either of the counties he represented until a private detective working on a wrongful conviction case that Richard Smothermon pushed brought this fact to the public through research for an appeal. He falsified his application to be district attorney. (Evidence available at http://www.thetruthaboutkelsey.com/Richard%20Smothermon/Smothermon.htm) 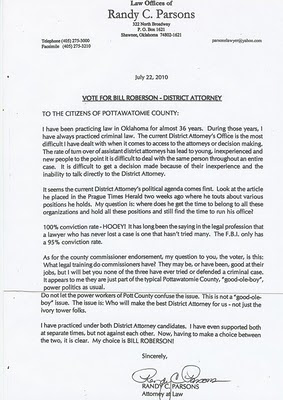 The choice is clear...a man with morals, or a man who will do anything, even put a private citizen in harm's way, to appease one family in order to boost his political aspirations.

Have a blessed day!
Posted by Advocate at 6:16 AM