Before getting into the testimony, there was something yesterday that really bothered me. They showed a picture over and over of Kelsey in the bathtub from January, 2005 of the "bruises" that were on her back side and they were of the alleged abuse against Raye Dawn. DHS said that she had spanked Kelsey with a brush. This is the single case of alleged abuse that is directly against Raye Dawn and the alleged crime for which the district attorney wanted Raye Dawn to accept a five-year plea. Raye Dawn refused the plea, stating that she had never spanked Kelsey with a brush and she would take her chances at trial instead of admitting to abusing Kelsey, which she never did.

From the moment they showed the pictures for the first time, I was shocked. I was so shocked in fact, that I had a hard time staying in my seat. I wanted to stand up and scream that those were not the pictures that the Briggs had shared with the media and that were on the Internet. The pictures they showed multiple times throughout the day were of Kelsey in a bathtub, just like the pictures that they use, but these pictures were of bright red bumps that were all over her butt and up her back and on her thighs and the insides of her thighs. They were CLEARLY of a rash. Clearly! No mother could look at the photos and think otherwise. We've all seen rashes and those were of a rash. If they were from a spanking with any type of object, the spanking had just occurred, and not from the time that Kelsey had been with Raye Dawn, more than four hours before her bath. Some of the bumps were raised above the skin and they were BRIGHT RED. There wasn't a single black or blue mark. All of them were a fiery red.

As you'll see in the photo that one of Raye's supporters got from the Briggs, it appears to be bruising of different colors and not the bright red, rash looking bumps that were in every single one of the photos that Lance's attorneys presented. There is no way that the photos could have been from the same time. Some of the photos wouldn't have been bright red and others black and blue unless the injuries happened just before the photos, and then after the redness went away, they took more pictures.

The Briggs say the photos were from the time that they gave Kelsey a bath at after 10 pm and Raye Dawn hadn't seen Kelsey since 6 pm. How would Kelsey have BRIGHT RED bruises if Raye had hit her four hours earlier? It does not make sense.

This is what is on www.thetruthaboutkelsey.com and is a picture that the Briggs put out on the Internet and in the media. 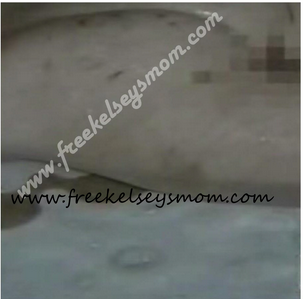 When comparing this photo with the ones I saw yesterday, this photo was clearly doctored by someone. It is not of the same injuries that the attorneys presented, which makes me question the other photos that we've seen. How many of them have been altered or doctored? I wish I had the photos that were shown yesterday so I could present the difference. You would all be shocked.
Posted by Advocate at 3:28 PM